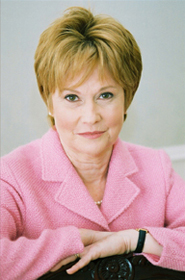 Elizabeth Knight is the author of bestselling books on the subjects of tea.   She is a frequent guest on national television and radio programs.  Knight traveled to China, Cornwall, England, France, Germany, India, Ireland, Italy, Japan, Peru, Portugal, Scotland, Spain, Taiwan, Tibet, and Wales to research and write numerous articles about tea and travel.  As tea sommelier for the historic St. Regis Hotel in New York City and spokesperson for the 40th anniversary of Royal Doulton’s china pattern, Old Country Roses, Elizabeth has created and presented programs in the U.S. and U.K.

MY QUESTION TO ELIZABETH CAME FROM THE QUESTION THAT SHE IS ASKED QUITE FREQUENTLY AFTER HER SPEAKING ENGAGEMENTS: "HOW DO I BECOME YOU?" EVERYONE WANTS TO SPEAK ABOUT TEA OR WRITE A BOOK.  COULD YOU TELL ME YOUR HISTORY IN WHAT IT TOOK TO GET YOU TO WHERE YOU ARE TODAY?

​​I wouldn’t want anyone wasting his or her time trying to become me. People are far more interesting and successful when they become themselves by following their own unique path. That said, my career began with my first post college job as a Special Events Manager for a department store chain.  At a time when I barely knew how to boil an egg,  I was assigned food and beverage events featuring celebrity chefs and tableware manufacturers.  In addition to learning how to make an omelet,  I watched Asian chefs use tea leaves to make a spice rub and poach fish or meat in brewed tea.  Lord Wedgwood, on his first American tour, taught me and the audience how to brew a proper pot of tea by pre-heating the pot. I began to realize that there was a world of tea beyond the bag I’d been mindlessly dunking in a mug.

I read everything that I could find about tea - the drink, the meal, the ritual. After I moved to New York City, I  discovered a world of exotic teas and tea cultures. I drank a lot of  new teas,  asked waiters  lots of questions, took cooking classes, attended one of the first Harney’s tea seminars, met Pearl Dexter, publisher of Tea A Magazine, and hosted tea parties in my fifth floor walk-up apartment. That led to catering tea parties. My idea was to arrange the food, prepare the tea and leave, but the clients often wanted me to stick around and tell them the story of tea - where it comes from, how it’s made, how to brew, etc. That led to teaching tea classes.

When I felt that I needed to know more about how to make and serve a proper English-style tea, I wrote to the Food and Beverage Managers of London’s top tea establishments – The Ritz, Fortnum & Mason, etc.- to ask if I could meet with staff members to learn about their tea traditions. Everyone I approached agreed so I hopped across the pond. It was surprising cheap to fly to the UK in January; the weather is so awful that there is very little tourist traffic. I holed up in a tiny B& B for two weeks drank and  ate afternoon tea for every meal. I asked so many questions, that one exasperated BBC celebrity chef said, “Oh luvvy, that’s such an American question!” One establishment, that allowed me into their kitchen, served Mariage Frères tea. Their tea butler insisted that I go to Paris to see that company’s tea museum and learn how the French brewed tea, and what they served with it, so I did.

When I got home, Pearl told me that she’d been approached by a publisher who was looking for someone to write a tea party book. I contacted the publisher’s editor  to ask what type of book she had in mind and why they thought they needed a second tea book for their catalog. I also asked to speak with the head of sales to learn what type of book he thought the sales force could actually sell and how they planned to promote the book. Based on those conversations, I wrote a book proposal to meet their stated needs and added some topics, based on the questions my students/clients frequently asked me, that I felt were missing. I was stunned when I got the contract as I’d never published a book. I immediately signed up for adult education non-fiction writing classes, read a lot of books about how to write non-fiction, and talked to writers who would talk to me. I also hired my own editor to review what I had written. I re-wrote a lot based on his feedback before I ever submitted anything to the publisher.

While I was writing that book, my husband was sent on temporary assignment to London, three months later I moved there, too and what was to have been a 6 month stay, turned into a two year adventure. I finished “Tea With Friends” in London, suggested another non-tea idea to the publisher and  wrote book two. The publisher wanted me to write an Irish tea book, but based on my UK travels, I’d begun to conduct mini-tea room tours for other ex-pats, and  promote my tea book by speaking to organizations throughout England, I thought that was too limited. I suggested a Celtic ( Ireland, Scotland, Cornwall, and Wales) tea book idea, instead. When the publisher declined, I decided to write it anyway and use my remaining time in the UK to research it. Had a wonderful time taking cooking lessons in Scotland, visiting the Welsh Folk Life Museum to learn about funeral teas, touring potteries and lots of other fascinating places. Bruce Richardson, Elmwood Inn Fines Teas, published that one. After he recommended me as a one-time speaker for The St. Regis Hotel, I ended up working for them as their first “tea sommelier.” The hotel’s customers would often tell me about their other favorite tea rooms or ask me about mine. That led to my conducting New York City tea tours and writing “Tea in the City New York “ a tea lover’s guidebook.

Somewhere along the line, based on my retail background, I pitched Royal Doulton China the idea that they could sell more fine china if they promoted entertaining easily with a tea party. I worked as a spokesperson for them both in retail stores and on the Home Shopping Network. When I realized that the shows would be live, no script, and I had no television experience, I hired an expert to teach me what to expect and how to perform in front of the camera. It was expensive and excruciating, but I was prepared and invited back. Looking back, I’m glad that I did my homework for all these projects. It didn’t feel like homework, however, because I’d decided what I wanted to learn, how I’d like to be taught and who the teachers might be. I’m still learning and loving it. I’m also teaching English as a second language to new citizens, and learning from them.
Cheers,
Elizabeth Knight, Tea With Friends
www.teawithfriends.com